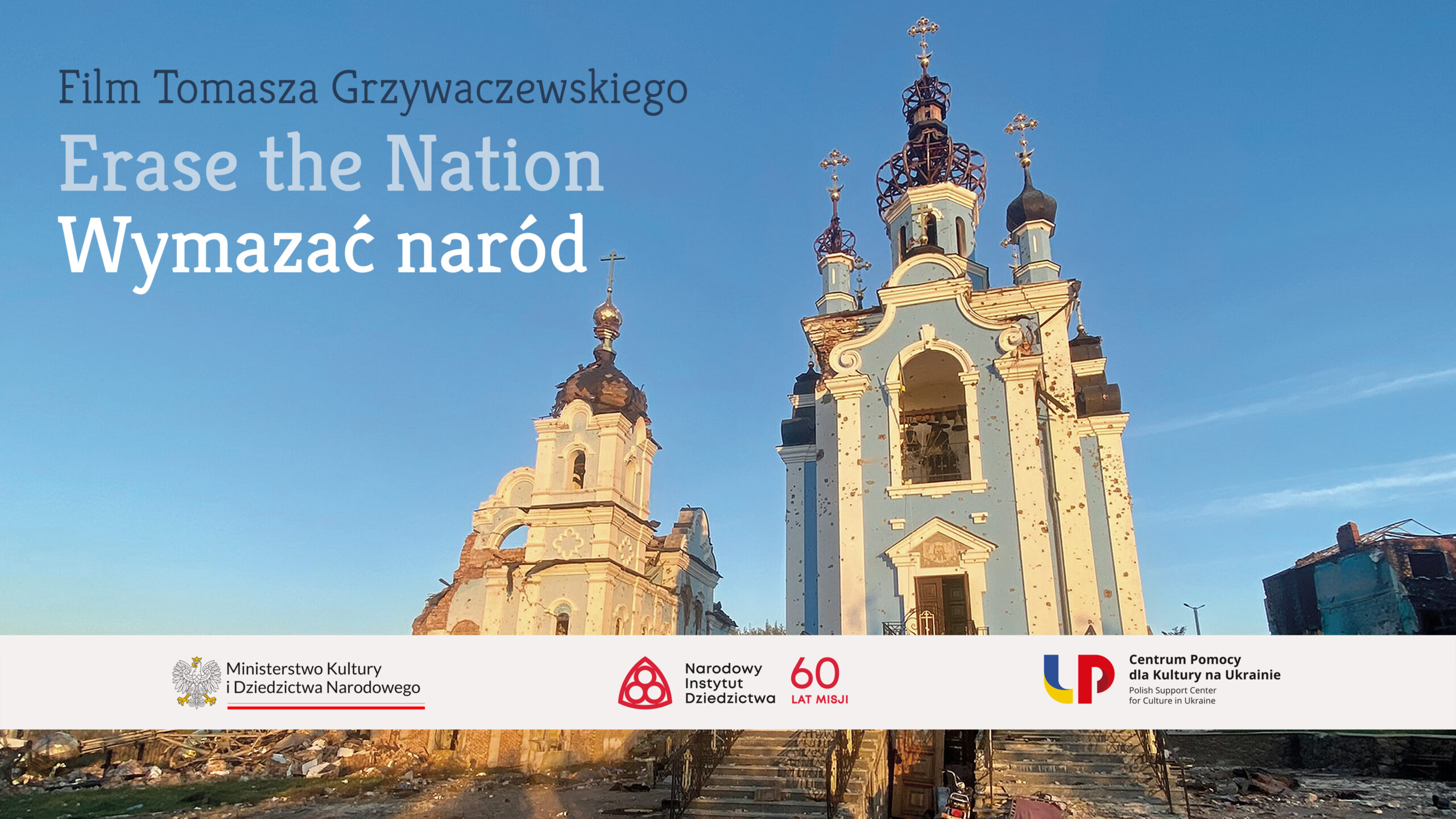 Putin’s actions bear a striking resemblance to those of dictators such as Hitler and Stalin. They all tried to deprive the occupied nations of their identity by erasing their culture – says Tomasz Grzywaczewski, director of the film ‘Erase the Nation.’ The film premiered on 17th January 2023.

Ukraine had over 5,000 museums, 65 historical-cultural reserves, and about 170,000 monuments before the war, including seven UNESCO World Heritage sites. During the nine months of the war, the Ministry of Culture and Information Policy of Ukraine registered over 800 instances of Ukraine’s cultural heritage destruction perpetrated by the Russian military forces. This number is growing by the day and still does not account for all the affected areas or the scale of the destruction.

Attacks on cultural heritage sites or the looting of Ukrainian museum collections violate international law. Now, as never before, Ukrainians and the cultural heritage in Ukraine need the support and assistance of the entire world community. The film intends to send a message to organisations and the international community to depict the scale and cruelty of the destruction committed there.

The documentary film ‘Erase the Nation,’ directed by Tomasz Grzywaczewski, shows the destruction of Ukraine’s cultural heritage, having been carried out by the Russian Federation’s troops since 24 February 2022. The film shows the deliberate destruction of Ukrainian monuments from Lviv, Chernivtsi, Ivankiv, Kyiv, and Kharkiv to Izium and Bohorodychy in eastern Ukraine. The crimes committed against secular and religious cultural heritage, from archaeological monuments to modern libraries and schools. Testimonies by Ukrainian cultural representatives paint a picture of a deliberate struggle of barbaric invaders against Ukrainian identity, for which Ukrainian heroes are giving their lives.

– We used to have a beautiful and rich exhibition. The Russians are destroying essential items. The attack on the Skovoroda museum was intended to destroy the greatness of our spirit. It was intended to erase the identity of our nation. A rocket flew from the north and hit the fuel supply. Then everything caught fire. The ceiling was on fire. It was like hell here, but amidst this hell, the monument to Hryhoriy Skovoroda has persevered, which is very significant and symbolic – says one of the documentary’s characters, Hanna Yarmish of the National H. S. Skovoroda Memorial Museum.

The film also presents ways of securing and attempting to protect damaged sites and the scale of assistance that is and will be needed to protect and restore cultural heritage in Ukraine.

The National Institute of Cultural Heritage has been participating in the protection of Ukraine’s cultural heritage since the beginning of the Russian aggression. By the decision of the Ministry of Culture and National Heritage, the Support Center for Culture in Ukraine, which is the primary coordinator of governmental assistance to the cultural sector, operates within the structure of the National Institute. The Center coordinates (Polish and foreign) initiatives to save Ukraine’s cultural resources and conducts information and educational activities about Ukrainian cultural heritage, particularly the threats and losses caused by warfare.

Tomasz Grzywaczewski – journalist and author of books, film scripts, and academic publications on international relations. He has reported on armed conflicts in the Donbas, Turkish Kurdistan, Nagorno-Karabakh, and currently, Ukraine.

The documentary was commissioned by the National Institute of Cultural Heritage, and financed by the Ministry of Culture and National Heritage.

The film, ‘Erase the Nation’ is available on the TV NID channel on YouTube.

You are invited to watch!