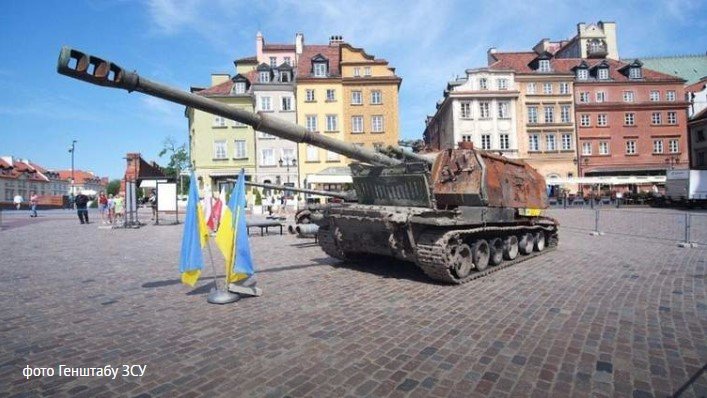 On 27th June at the Castle Square in Warsaw Ukraine’s Minister of Defence Oleksii Yuriyovych Reznikov opened the exhibition entitled “For Our Freedom and Yours” which showcases Russian military equipment destroyed in the ongoing war in Ukraine. The visitors will be able to see, among others, a T72B tank damaged in the region of the village of Dmytrivka at the suburbs of Kyiv and a 2S19 Msta-S self-propelled howitzer gun. Opening the exhibition, Minister Reznikov said that “the Armed Forces of Ukraine, our guards, border guards and members of other Defence Forces have proven that if Russian tanks can pass through our territory they can do this as exhibits only”.

The opening of the exhibition was attended, among others, by Ukraine’s Deputy Minister of Defence Hanna Malyar, Poland’s Head of the Chancellery of the Prime Minister Michał Dworczyk, Poland’s Secretary of State at the Ministry of Defence Wojciech Skurkiewicz and Ukraine’s Chargé d’affaires in Poland Oleh Kuts.

The exhibition can be viewed in Warsaw until 6th July. After that date, it will be shown in other cities in Poland.