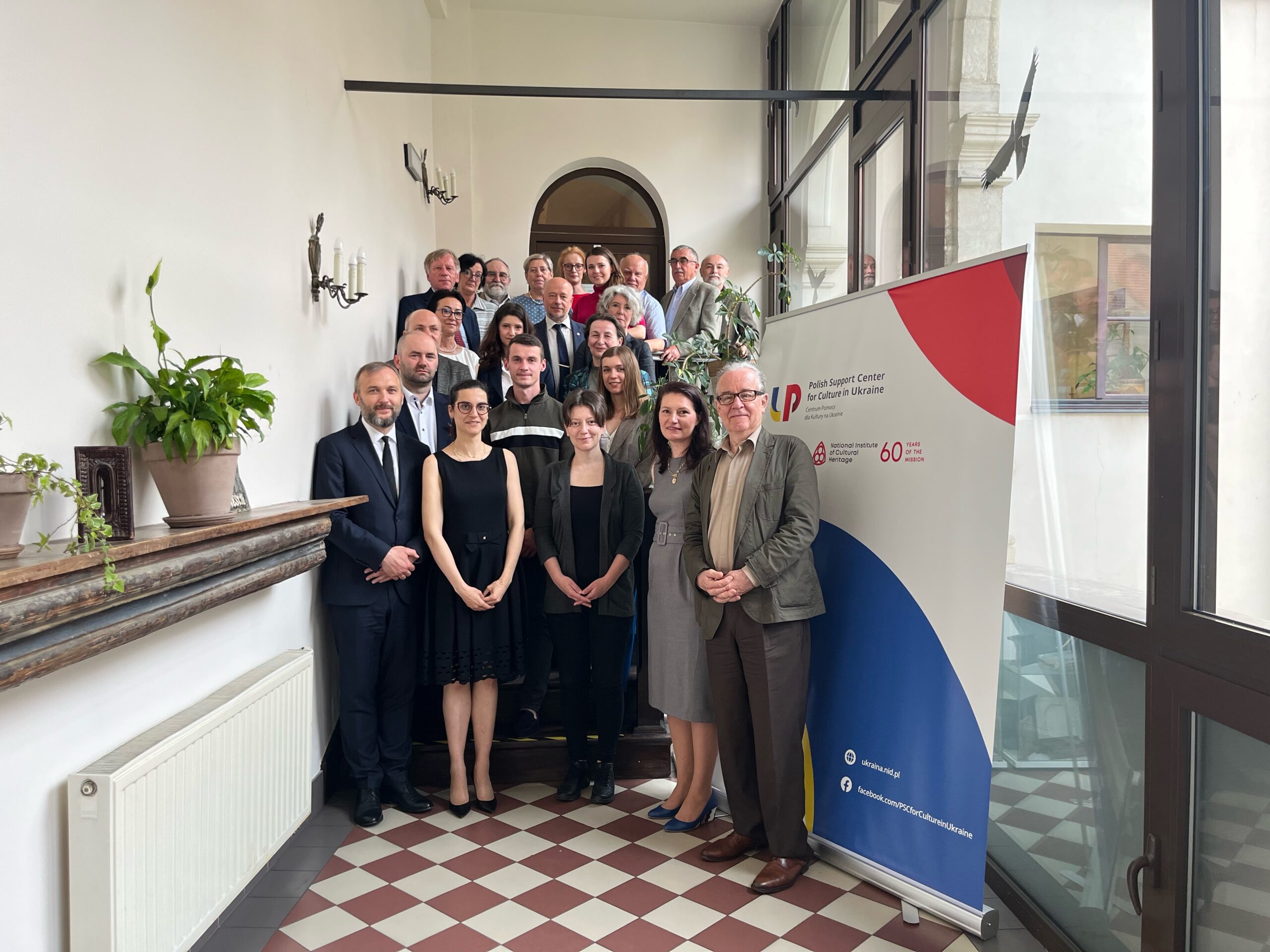 The International Conservators Council held its meeting in Krakow on 8th May 2022.  The Council brings together representatives of Polish and Ukrainian (state and diocesan) conservation services, as well as institutions involved in the protection of cultural heritage. During the meeting, challenges related to the protection of world heritage and Polish-Ukrainian UNESCO World Heritage Sites – Wooden Orthodox Churches of the Carpathian Region in Poland and Ukraine – were discussed in view of the ongoing war in Ukraine. The meeting was attended by Ukraine’s Deputy Minister of Culture and Information Policy Ms Kateryna Chuieva, and Ms Katarzyna Zalasińska, Director of the National Institute of Cultural Heritage of Poland.

The issue of safeguarding Orthodox churches entered in the UNESCO World Heritage List in the context of the Russian aggression against Ukraine dominated the deliberations of the International Conservators Council participated by representatives of Polish conservation services, experts of the National Institute of Cultural Heritage and the POLONIKA Institute, as well as representatives of the Ministry of Culture and National Heritage and the Ukraine’s delegation. The Ukraine’s delegation included, among others, Mr Mykola Haida, President of ICOMOS Ukraine, and Mr Włodzimierz Herycz, Co-President the International Steering Committee for the Conservation of the UNESCO World Heritage Sites and a researcher at the L’viv National Art Gallery. During the meeting, the situation of cultural heritage in Ukraine, its perils and losses amidst Russian aggression were discussed, and possibilities for future support were presented. In co-operation with the Polish Support Center for Culture in Ukraine, operating within the National Institute of Cultural Heritage, a training programme for specialists from various fields and institutions related to immovable cultural heritage and a research co-operation project are to be prepared. Polish-Ukrainian consultations also concerned support in the area of new technologies, research on the war losses in the post-conflict period, and development of premises of reforming the monument protection system in Ukraine.

The International Steering Committee for the Conservation of the UNESCO World Heritage Sites was established in 2013 to enable exchange of information and co-operation between experts involved in safeguarding the heritage structures at the border junction of the two countries. It unites their administrators, representatives of state and diocesan conservation services and institutions involved in the protection of Polish and Ukrainian heritage. At the annual meetings of those involved in care of the historical churches entered in the UNESCO World Heritage List, conservation achievements with regard to the infrastructure of the 16 wooden churches are presented. At the meetings of the International Conservators Council, plans for activities focused on the protection of cultural heritage are discussed. The accompanying study visits serve as an opportunity for practical presentation of the issues discussed and enable the participants to see the effects of the performed conservation work. The work of the Council is coordinated by the National Institute of Cultural Heritage, which was also responsible for preparing the application to enter the historical orthodox churches in the UNESCO List.

The entry was made in 2013. The churches, located on the Polish-Ukrainian border of the Carpathian Mountains, are an exceptional example of the once widespread tradition of wooden Orthodox church construction in Slavic countries. The architectural patterns of tripartite design churches, brogue domes and free-standing bell towers reflect the requirements of the Eastern Church liturgy. The buildings also reflect the cultural traditions of local communities. The churches present various types of architecture: Hutsul in the south-eastern Ukrainian Carpathian region in Nizhniy Verbizh and Yasin; Galician in the northern Carpathian region, on both sides of the Polish-Ukrainian border, in Rohatyn, Drogobych, Zhovkva, Potelich, as well as in Radruż and Chotyniec; Boyko, on both sides of the Polish-Ukrainian border near the border with Slovakia in Smolnik, Uzhok and Matkiv; and Lemko in the Polish Western Carpathians in Powroźnik, Brunary Wyżne, Owczary, Kwiatoń and Turzańsk.

Russia is deliberately taking action to destroy Ukrainian cultural heritage – a testimony to the country’s distinctiveness. There are seven World Heritage Sites in Ukraine. These include the Pechersk Lavra and the Hagia Sophia in Kyiv and the Old City of L’viv. Of the seven UNESCO World Heritage Sites, two were jointly entered by Poland and Ukraine. These are Wooden Churches of the Carpathian Region in Poland and Ukraine and Ancient and Primeval Beech Forests in the Carpathians and Other Regions of Europe. The so-called UNESCO information list of candidate sites includes another 17 heritage properties in Ukraine. These include sites located in active combat zones – the historical centre of Chernihiv, the archaeological site of Kamiana Mohila in the Zaporizhia region, which according to some sources is currently mined, Kharkiv’s Derzhprom or the Askania Nova Biosphere Reserve located in the Kherson region – said Dr. Katarzyna Zalasińska, Director of the National Institute of Cultural Heritage.

Since the beginning of the war, Poland has been involved in rescuing and safeguarding cultural heritage in Ukraine. The co-ordination of these activities is provided by the Polish Support Center for Culture in Ukraine – the main hub of governmental assistance for Ukrainian cultural heritage. The Center was established by the Minister of Culture and National Heritage at the National Institute of Cultural Heritage. The Institute’s expertise and long-standing Polish-Ukrainian co-operation from the first day of the war have created the basis for organising effective assistance for endangered heritage monuments and the cultural institutions rescuing them.