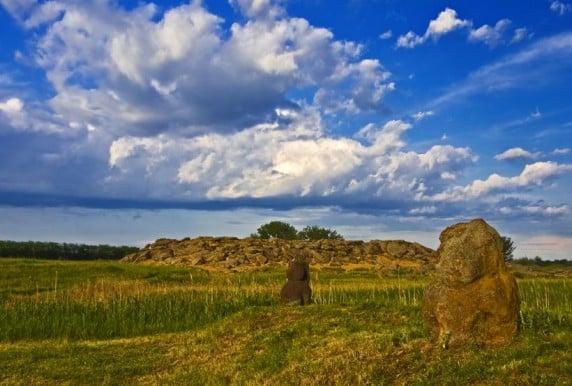 Russian troops have mined the area around the valuable archaeological site of Kamiana Mogila (Stone Tomb), located in the Zaporizhia region of Ukraine.

The monument of exceptional value was placed on the Ukrainian Tentative List od UNESCO in 2006. Today, as a result of Russian aggression, it may be irretrievably lost.

The central part of the archaeological site is a 12 m high mound with an area of 2.5 ha, the so-called “Stone Tomb”. This mound consists of individual sandstone blocks, between which there are caves and grottoes. Their walls are covered with over 1000 petroglyphs with symbolic, anthropomorphic and zoomorphic images. The oldest of them – a mammoth – was created in the late Stone Age. Most petroglyphs were created in the Bronze Age. It is believed that this was a religious site considered to be one of the oldest megalithic temples in the world, which functioned for many thousands of years.
To date, the site has been well preserved, with some caves and caverns yet to be excavated. Near this rock mound are the remains of several sites and settlements from the Mesolithic and Neolithic periods, forming beyond any doubt a single entity. According to the Zaporozhsky Regional Military Administration, the area around the Stone Tomb – mainly forests and roads – has been mined in rece#heritage